Bagpiper
Amherst Croft is a character from the second season of Canadian Boys. He is the husband of Springhill.

Amherst is a 24-year-old man of White Scottish Canadian descent. He has brown hair and light hazel eyes. He wears a pale cream long-sleeved collared shirt, a light brown tartan kilt fastened with a belt, a pair of black gillie shoes with white cotton socks inside, and an amber bonnet with a dark orange bobble.

Amherst has been married to Springhill since the eighth season of the series.

Amherst is very compassionate, and he loves giving traditional Scottish gifts such as scones, thistles and Celtic jewellery to his friends and family. It was this deep-felt kindness that led him to fall in love with and eventually marry Springhill, as he was always dropping by his place so he could have jam with his scones.

Amherst with his family.

Amherst and Springhill show each other their love. 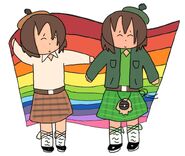 Amherst (centre) with Springhill, Joggins, Parrsboro and Pugwash at a picnic in the park.

Amherst (lower left) with Springhill, Joggins, Parrsboro and Pugwash at the beach.
Community content is available under CC-BY-SA unless otherwise noted.
Advertisement