Sackville Charles is a character in the Canadian Boys in-universe children's TV and book series Sackville Sailor. He is the protagonist of the show, giving his name to the title.

Sackville is a young cadet sailor (18 years old) of White English Canadian heritage who has just started a new life in the Navy. He has brown hair and light blue eyes. He wears a bright blue Naval uniform with a navy-blue collar and epaulettes, a bright azure sailor's hat and a pair of black-and-light blue shoes with revealing holes in the top. He often works alongside two fellow cadet sailors named Oromocto and Aulac, so they are almost always seen together as a trio.

Sackville is kind and sweet, if somewhat naive. He was initially daunted by the prospect of spending many times in an unfamiliar place away from home (as seen in the very first episode, Sackville and the HMCS Glacier), but as the months and years passed he slowly got used to the atmosphere of a Navy ship, and he now looks forward to working on deck with his fellow sailors every morning.

Due to being a cadet, Sackville is a little more prone to making mistakes and causing a bit of havoc on board than a more experienced member of the Navy; the Season 1 episode Sackville's Bad Day illustrates this perfectly, as he became reclusive and would not take any orders given to him. Despite this, he's always willing to try new things, and his crewmates are always there to help him whenever he runs into trouble. Sackville's sweet charm and manner endears him to the entire crew, and he loves to give the salute every morning to show his allegiance with fellow sailors on other ships and respect for the City-of-Canadian Navy.

Due to being the protagonist, Sackville has appeared in every episode of the series to date. He will also make an appearance in the upcoming movie alongside Oromocto and Aulac. 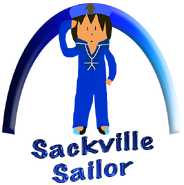 Sackville appears in the series' logo.
Add a photo to this gallery

Retrieved from "https://canadian-boys.fandom.com/wiki/Sackville_(Sackville_Sailor)?oldid=6519"
Community content is available under CC-BY-SA unless otherwise noted.