Sackville, Oromocto, Aulac, the Captain
Sackville Sailor is a children's TV series in the Canadian Boys universe (a show-within-a-show). Beginning its record-breaking run in 1990 (it is currently the longest-running children's series on COCBC), it is very popular with the children of the City of Canada (and many adults too) due to the charm of the characters (especially the titular sailor protagonist) and problem-solving aspects of the show's storylines, which parents consider important for children to learn about.

As well as a TV show, the series has also been adapted into storybooks which are designed to help preschool children to read with their favourite characters from the show.

The series follows the daily lives of the crew of the Navy ship the HMCS Glacier, especially an 18-year-old cadet sailor named Sackville (for whom the show is named after), his fellow cadets Oromocto and Aulac, and the Captain. Through storytelling (the characters never speak, instead having a narrator who provides all the voices for the characters), Sackville and the crew (and sometimes the Captain too) learn how to tackle everyday problems and learn some valuable skills along the way, such as working together and accepting everybody's differences while also treating them equally.

An 18-year-old cadet sailor who is just making a start at life in the Navy. Initially finding the prospect of spending many times away from home daunting (as seen in the first episode of Season 1, Sackville & the HMCS Glacier), he soon saw the brighter side of serving in the Navy and now enjoys honing his sailing skills on deck every morning. Owing to being a cadet, he is somewhat prone to making mistakes and causing a bit of havoc on board (such as in the Season 1 episode Sackville's Bad Day, in which he became reclusive and refused to carry out any orders given to him). However, he's always willing to try new things, and his fellow sailors are always there to help him out when he's having troubles. Sackville is popular amongst the crew because of his sweet charm and manner. His favourite part of Naval life is the salute, which the crew give every morning to show their allegiance with fellow sailors on other ships and respect for the City-of-Canadian Navy.

A 19-year-old cadet sailor, slightly higher up in rank than Sackville. The only black crew member, he is also learning the tasks and lingo of Naval life, although he is not as error-prone as Sackville as he knows a little more. He is always all-ears and will readily carry out any errands given to him. Though he has had full emergency training, the Season 2 episode Operation Oromocto showed that he isn't actually as competent in these skills as he always thought he was, because this was his first time in a real emergency and not merely a drill. Oromocto is Sackville's main proprietor of good advice, and he's always on hand should Sackville ever get stumped on what to do in a sticky situation. So far, he is the only crew member to have won a medal (the Canadian Cross of the Sea in the Season 3 episode Oromocto Braves the Storm, for responding quickly to a human emergency out in rough, cold seas).

A 21-year-old cadet sailor (despite having served in the Navy for at least 4 years prior to the events of the series). Of a higher rank than Oromocto and Sackville (although Oromocto may technically be promoted in rank due to winning a medal), he has the most Naval knowledge out of the 'main' trio, and uses this to help out Sackville and Oromocto when they run into problems or don't know about a procedure. While Oromocto specializes in giving useful advice to Sackville, Aulac is more of a commander, giving out any orders to him on behalf of the Captain. (This is especially prevalent in the Season 1 episode Sackville's Bad Day, in which he tries - unsuccessfully - to coerce Sackville into doing the daily cleaning routine.) Aulac has often had to save Sackville and Oromocto whenever they get caught up in heavy storms or crash into obstacles such as sea rocks or a harbour wall, like in the Season 2 episode Operation Oromocto, where he had to finish off Oromocto's job of rectifying an emergency as he found out he wasn't quite good enough to be up to the task. Aulac is good friends with the Captain, whom he always receives orders from to pass onto the other sailors.

The captain of the HMCS Glacier (his real name, Lakeville MacNaughton, was found out by Sackville in the Season 4 episode What's the Captain's Name?) The highest-ranked crew member, he oversees the running of daily tasks on deck, checks on the other crew members for behaviour, steers the ship and gives out orders. Considering his authoritative position, the Captain is somewhat stern, sometimes getting very angry with the sailors if they don't carry out his orders as expected, as seen in the Season 1 episode Sackville's Bad Day, where having finally had enough of Sackville's defiance, he gives him a severe shouting-at in front of all the other sailors, causing Sackville to lose his confidence and dash away to his dorm, crying in humiliation. However, the Captain does have some compassion - referring back to Sackville's Bad Day, he comes to Sackville the next morning, asking him to forgive him for hurting his pride and being so harsh on him. When he isn't giving out any orders, he loves to host social gatherings for the crew on deck, where they can sing traditional sea shanties, eat, drink and be merry in a display of amity and unity. The Captain is on good terms with Aulac, who often gives out orders on his behalf. 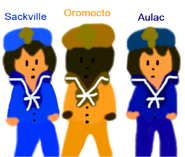 Sketch of Sackville, Oromocto and Aulac.

A rainbow arrangement of the sailors.