Bagpiper
Sambro Ketch is a character from the second season of Canadian Boys. Sambro's boyfriend, Bracebridge, is 11 years younger than him.

Sambro is a 26-year-old man of White Scottish Canadian heritage. He has brown hair and light blue eyes. He wears a pale blue collared shirt with a navy blue tartan kilt (the provincial tartan of Nova Scotia, where he hails from) fastened with a belt, and black gillie shoes with white cotton socks and dark purple ribbons. Sambro has a noted Scottish brogue in his voice when he speaks, which is another nod to his Scottish roots.

Sambro is very kind and sweet, just like his boyfriend Bracebridge. He loves to play the bagpipes when he is out and around the city, and sometimes Bracebridge wants him to play a song for each other. 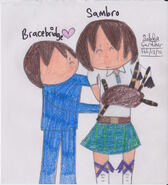 Sambro gets a kiss from Bracebridge.

Sambro being shown Bracebridge's love for him. This artwork shows Bracebridge in his new design.
Community content is available under CC-BY-SA unless otherwise noted.
Advertisement