Canadian Boys Wiki
Register
Don't have an account?
Sign In
Advertisement
in: TV shows in the Canadian Boys universe, Shows-within-a-show, Secondary School by the Sea

Dartmouth, Jollimore, Rockingham, Boulderwood, Jenhamville High students
Secondary School by the Sea is a comedy/drama TV series in the Canadian Boys universe. First airing on COCBC in 2001, it has gained somewhat of a large cult following amongst many of the more mature citizens of the City of Canada, especially adult animation enthusiasts. The series is well-known for its light-hearted handling of serious threats and issues such as paranoia and the possibility of murder in an educational environment. The series has also been adapted into comic books and graphic novels.

The series follows the daily work (and antics) of the students and teachers at the Jenhamville Secondary School (which is an actual school in the Canadian Boys universe, being located in the northeast of the city, but with some elements obviously fictionalized). Two young teachers with strikingly contrasting personalities and outlooks on life, named Dartmouth and Jollimore, are the prime protagonists of the series, working to keep the students in tow by giving them their daily lessons, overseeing their studies and overall behaviour. The show is well-known (and somewhat infamous) for its humorous view of antisocial behaviour in schools and crimes against educational authoritative figures, most prominently (attempted) murder of a teacher.

A 28-year-old teacher, the main antagonist of the series. Pessimistic and always expecting things to turn out for the worst or go horribly wrong, he never looks forward to teaching at the school - the students are always finding new ways to get rid of him, resulting in him sustaining injuries (sometimes they are so severe that he has to be hospitalized for a while afterwards). Because of his good luck, Dartmouth will always survive whatever murderous methods the students will cook up next, but this comes at something of a cost - he has developed chronic paranoia, causing him to have nightmares about being successfully murdered and constantly turning thoughts in his mind over what - or who - is around the corner. Because of this, he is secretly suffering, but he does not make it known because of his cruel, uncaring demeanour - he has a very bad and violent habit of randomly hitting students with his suitcase, even those who are well-behaved (which is why the students want to kill him).

A 26-year-old teacher, the main protagonist of the series to contrast with Dartmouth's antagonistic traits. An optimist, he is always looking on the bright side of life and loves to teach his students, as they get on the most with him. However, he does know when to act seriously, such as when visiting Dartmouth in hospital after sustaining severe injuries from an attempt on his life by the students. His philosophy of always finding the positives in life put him firmly in Dartmouth's line of fire, as he is constantly getting annoyed by his 'do-gooding' and emphasizing the joys of positive thinking, which Dartmouth always complains about as being "a load of New Age malarkey". In a similar manner, Jollimore is always disregarding Dartmouth's naysaying, telling others not to mind him as he's always wrong - everything will turn out just alright in the end.

A 33-year-old teacher. He has a twin brother named Boulderwood, who is the exact same age as him, and also works at the school.

A 33-year-old teacher, the twin brother of Rockingham.

The students who study at Jenhamville High. They are nearly always seen dressed up in their school uniforms, except on some occasions such as school trips out, 'casual' days, or when they are not at school. Many of them are badly-behaved and have psychopathic tendencies, especially towards Dartmouth, who is their number-one murder target.

Dartmouth and Jollimore with some of their students in a classroom.

Dartmouth and Jollimore with their students on the beach.

Dartmouth and Jollimore together.

Alternative art of Dartmouth and Jollimore together. 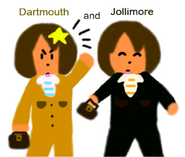