Star Lord of the Universe

Stellarton Starman is the protagonist of the eponymous sci-fi comics and TV series.

Stellarton appears to be a man of White English Canadian heritage in his late 30s or 40s. However, in reality, he is over 3,000 years old and the ruling Star Lord of the Universe, constantly fighting against the malevolent forces of New Glasgow Nebula and his galactic henchmen.

Stellarton wears a spacesuit in bright blue, lilac and gold with sky-blue and azure cuffs and a golden star motif in the middle, and cornflower-blue astronaut's boots with navy-blue bootstraps.

Artwork of Stellarton Starman with a background. He carries his iconic weapon, the Stellarizer laser gun. 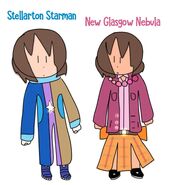 Stellarton with his lifelong nemesis, New Glasgow Nebula.
Add a photo to this gallery
Retrieved from "https://canadian-boys.fandom.com/wiki/Stellarton_Starman_(character)?oldid=6426"
Community content is available under CC-BY-SA unless otherwise noted.