Singer/songwriter/dancer
Toronto Lester is a character from the first season of Canadian Boys.

Toronto is a 21-year-old man of White English Canadian ethnicity. He has brown hair and dark blue eyes. He wears a dark blue shirt, a pair of navy blue jeans fastened in place with a belt, and bright blue-and-black shoes with revealing holes in the top. His parents are named Napanee and Deseronto.

Toronto is a singer/songwriter/dancer, and he is extremely popular throughout the city of Canada (and the world). He is considered the most 'cosmopolitan' of all the inhabitants of the Canadian Boys' House, and he is very tolerant and courteous.

Toronto released his debut album, Stories of a Young Canadian Man, in January 2011. It became an instant hit; Toronto, in many ways, became an overnight musical success. Besotted fans will often rush up to Toronto in a wild frenzy when he is spotted, snapping selfies with him on their phones and tablets for Instagramming and flashing their iPods in his face, boasting that they have all his music on hand.

Possibly the most well-known song of Toronto's is Canadian Apparel. This song celebrates the Canadian fashion industry and its vividness and charm. It is the song Toronto himself is most associated with - one can't look at Toronto without immediately picturing him doing the now world-famous pose, saying in a serious tone: "You know Canadian Apparel?" This has become a sensation amongst the citizens of the city of Canada, and nobody lets an airing of the music video on TV or on the radio pass by without imitating Toronto's pose from the beginning, as well as the catchphrase.

Toronto's life and rise to musical stardom is the subject of the first Canadian Boys movie, Toronto's Tale. With the support of his parents Napanee and Deseronto, Toronto pursues an education in music while at high school, which leads on to a degree in music production at college. While studying for his degree, Toronto begins to write lyrics for the songs that will eventually be recorded onto his debut album, inspired by his childhood living in the city of Toronto. In a surprise twist, Toronto and his classmates are taken on an outing to an exhibition on Canadian fashion at the Royal Ontario Museum, as some of the outfits displayed there were worn by Canadian celebrities. This gives Toronto a flash of new inspiration, and he composes some new lyrics alongside sketches of some of the outfits exhibited in his journal. These rough notes form the basis of what will be the song that kick-starts his career as a musical superstar: Canadian Apparel.

Toronto is a protagonist in the 2017 video game Freddy for Action. He is the sole team member at the very beginning of the game, but is soon joined by Montreal and Vancouver in their quest to save the city of Canada from Fredericton and his posse of villains' rampage. In a reflection of him being a singer and dancer in the series, Toronto's attacks and defences are mostly based on music and dance moves.

Toronto poses as he does in the Canadian Apparel music video. 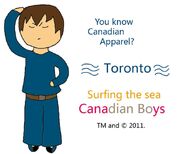 Toronto dressed up in a CN Tower costume.

Toronto's timeline coloured in with markers.

Toronto's timeline coloured in with markers and with added annotations.

Toronto dressed in a basketball uniform, as he appears in Toronto's Tale.